Åte VR – It all started with a project on digital death

Since Ege Jespersen was a child, he always dreamed of starting his own company. Behind the computer screen at his parents farm in Ejdrup, Northern Jutland, he planned his breakthrough. When the time came for him to move away from home, he decided to move to Aarhus. To him, this was the ideal city for startups. Today, he is 26 years old, lives in Aarhus, and is the founder of the VR company Åte VR.

“I grew up on my parents’ farm on the countryside in Northern Jutland. My parents’ place is a protected environment far away from urban life and digitalization. But because of the internet, I learned so much more about the outer world. It has always been my dream to create solutions that expand markets, though this can be challenging. However, that hasn’t stopped me from my dream. I knew that my goal was and still is to make the world a better place.”

Since 2014, Ege Jespersen has been busy with establishing his company Åte VR. The office of Åte VR is located at Ideas Lab in Aarhus Filmby, which is supported by Aarhus Kommune. The place is free to use for startups and entrepreneurs. Everyone who’s part of the community is offered counseling from business angels and lawyers. This provides great opportunities for Åte VR, but it is in Ege’s interest to get his own office once the economy extends to it.

“The Mid Jutlandic part of Denmark is a good, protected and calm place for startups. The things that are going on in Copenhagen are very hectic and impulsive. Here, there are almost as many people, but we’ve got another rhythm. Further, we have the facilities to provide a framework for a good incubator”.

Ege Jespersen graduated as cand.it in Digital Design at Aarhus University in spring 2017. During his bachelor, he initiated his first VR project in 2014 that made use of the VR goggles Oculus Rift DK1. The name of the project was Information Monument and focused on what happens to our digital data when we die. He imagined what data he himself would leave behind throughout his entire life. He started thinking if it would be possible to one day create a virtual figure out of this data. Ege won a prize for the project, and with his increased interest in the VR technology and VR content creation, he kickstarted the idea for Åte VR

Ever since his project Information Monument, Ege Jespersen’s VR know-how has increased. Today, Åte VR works as an independent company and through the collaboration with his other company, Gonio VR. Gonio VR develops VR solutions for rehabilitation of shoulder and neck. He started this company together with physiotherapist Jesper Aggergaard. The company already has Brøndby Municipality as client and is in dialogue with other hospitals to create pilot projects. Mostly you see VR used in the game industry, but the mission of Åte VR is to use the techniques of VR in healthcare. The company wants to challenge how VR can strengthen new areas of healthcare that actually shows to be cheaper and more motivating for patients. Ege Jespersen see great potential in opening a new market within VR in healthcare while at the same time helping people.

In order to approach the core of the health care system, Ege Jespersen contacted a wide span of various treatment-units around in Denmark. For the most part he was in contact with public departments but also few private psychologists and occupational therapists.

“My uncle advised me not to go to the secretary but directly to the top, so I did”

Through different introductions, Ege got through to Hammel Neurocenter, which provided Ege and Åte VR with tasks for other public healthcare authorities. For a small and private company as Åte VR, it can be quite difficult to break through to the Danish healthcare system. However, Ege is calm and hopeful. He often does talks for cliniques and hospitals around the country and he is aware of the fact that it is a long process to mature a market.

“One thing we are struggling with is that VR within the healthcare system is new. So the important thing for us to do at Åte VR is to mature the industry and healthcare system so they one day take more usage of VR solutions,”

Ege Jespersen has considered finding more clients from the private sector in the future, even though it is smaller area. He believes that when dealing with the private sector, it is important at first to use the money on large companies.

“There is a growing amount of cases where it is profitable to look more into the private sector with potential for significant collaborations. For instance Falck has a big platform for physiotherapist. The same goes for Novo Nordisk. They will be able to sell as well inform about VR-products that provide treatment. Of course they need to know the advantages of collaborating with us. One of the best arguments is that we can avoid companies to be outpaced by technology.” 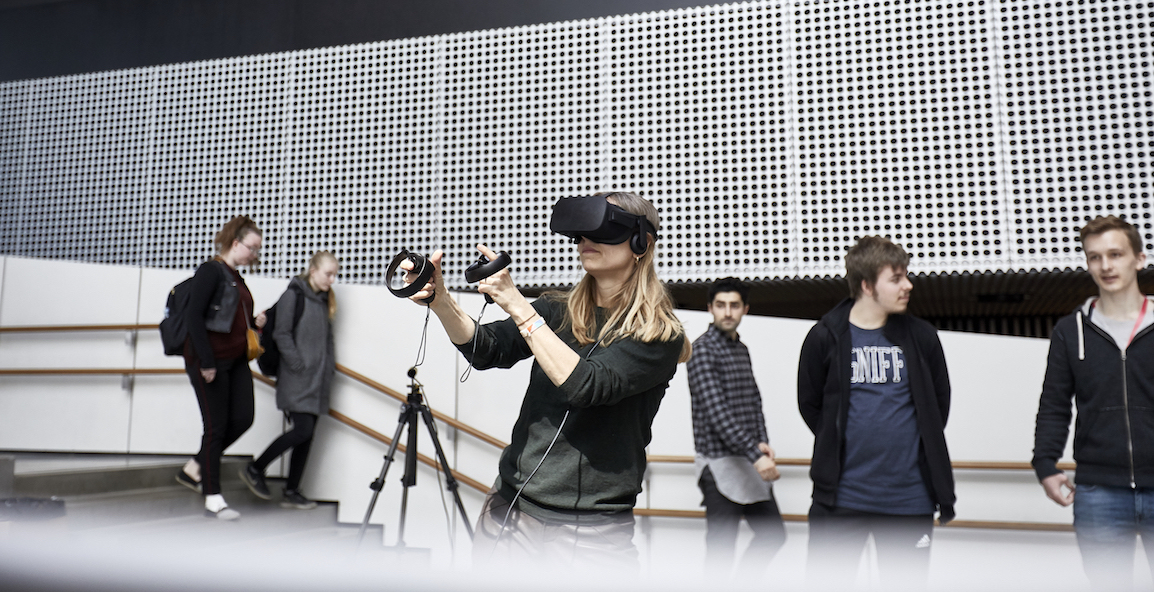 For Ege Jespersen and Åte VR one of the drivers for the business is to keep the human close connected to the creations. Through this he is inspired by Apple.

“Apple is in many ways uncanny, however they speak on a human level and their products are easy to use. So if we can create something – a product, a solution – this is as user friendly as Apple’s, we have the chance to push the agenda forward,”

According to Ege, the ultimate breakthrough for Åte VR will require that the company achieve better and more specific technical and usable solutions and at the same time a creative and artistic angle to their projects. Ege is very inspired to think in possibilities and paradigmes.

He is especially finding inspiration from performance art in order to rethink new methods, which is also clearly expressed on his personal website that only consists of colorful illustrations. With a combination of art and VR Technology, Åte VR works every day on making Ege Jespersen’s boyhood dream come true; create solutions with a wide reach and make the world a better place. Maybe one fine day, the tractors on the farm in Northern Jutland will be replaced by VR gear?

This article is created for More Creative.